IF YOU BELIEVE YOU’VE BEEN EXPOSED TO TOXIC CABIN AIR, FILL OUT THIS FORM

Remember, you have a limited amount of time to fill out a Workers’ Compensation claim after being exposed to a toxic fume event.
Click here to find more information about your state. 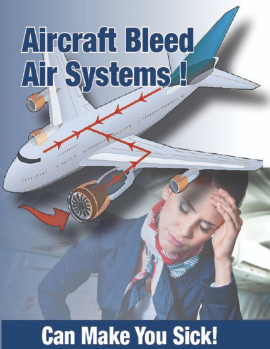 Protect Your Job and Your Health

If you experience sickness due to a cabin air fume event, note the following in your report:

When you see the Doctor, it is important that you tell him/her what happened on the aircraft and the following:

While there are still no specific routine tests for the chemicals in bleed air, there are some tests that can be done by your doctor that can help diagnosis and guide treatment. Make sure you ask for an arterial blood gas test.

These “fume events” refer to a potentially toxic environment created by contaminated bleed air used to pressurize and ventilate aircraft cockpit and cabins, and are accompanied by reports of abnormal odors, smoke, haze or fumes in the cabin.

Bleed air contamination is not the only cause of fume events or medical symptoms among passengers and crew. Reduced oxygen levels, ozone, de-icing fluids, insecticides, fuel vapor, and fumes from ground service vehicles or other aircraft may also be responsible.

Respiratory symptoms appear to be the most common initial symptoms following air quality incidents. Although they often resolve quickly, irritant-induced asthma may persist for more than 3 months following the exposure episode.